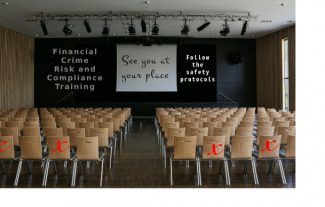 Understanding Suspicion in Financial Crime. (In House only)

At the heart of everything to do with financial crime is knowledge, belief and suspicion and the greatest of these is suspicion,

Why and how people do, or do not, form suspicion and if they do form it, why do they, or why don't they, report it?

And the questions keep on coming.....

Why do some sectors of the regulated industry report more freely to the Financial Intelligence Unit than others?

How does culture - and "community" - affect the the way people view the conduct of others?

Is the current vogue for the release of confidential or sensitive information by people who - mostly - mistakenly think they are whistle-blowers an indicator of a greater awareness of suspicion? If so, why are they not simply filing SARs?

Why do prosecutors and judges have so much difficulty explaining wilful blindness? Or "reasonable cause to know/believe/suspect"

This two day course is specifically for those who must make decisions as to whether others should have been suspicious. That's the "reasonable cause for suspicion" part of law and regulation.

It is to be emphasised that this course does not concentrate on law and regulation. It references laws, of course, but its primary purpose is to examine the cultural, societal, sociological, criminological, psychological and more so as to understand this most core of subjects.

Although the focus is on financial crime, the lessons learned will be of benefit in relation to other criminal investigations and trials

Format: This seminar will be part lecture, part exercise and part workshop.

This course is available in two versions:

Version A: for prosecutors, FIUs, investigators, customs and immigration officers, intelligence agencies, regulators and the judiciary concentrating on the reasons that suspicion is formed, is not formed and why people often deny that it is formed and a focus on explaining to a Court or Jury issues such as wilful blindness.

Version B: for financial crime risk and compliance officers concentrating on the reasons that suspicion is formed, is not formed and why people often deny that it is formed and a focus on explaining to staff how to recognise and act on suspicion.

We will consider a course to be in-house if it is arranged by e.g. a group representing the judiciary or a by a chambers of independent lawyers.

Fill in the enquiry form and, in the notes, specify the course you are interested in and your proposed dates. We'll get back to you.