Ten Things You Need to Know About Dealing with Death – Media Q&A
FOR MEDIA USE ONLY: FOR TERMS OF USE, SEE BELOW

Q. Dealing with the death of a loved one is something we all have to cope with. Why did you decide to write about it?

A. I didn’t make that decision, at least not in the way you mean. The book came about by reason of circumstances not because I set out to write it.

My mother had been ill for some time and the family had been rallying around but the main burden fell on my father who, himself, is ageing and is not very well. I had spent a lot of time in the UK last year, trying to help them through difficult times after my mother had had another in a long series of serious operations.

Just before Christmas (2014), when she was admitted to hospital for the final time, I had only just returned to Kuala Lumpur from a visit to the UK. In hospital, she seemed to be responding well to treatment and so I didn’t go back then. It was a big surprise to us all when, suddenly, she went into a rapid decline and died.

I jumped straight on a plane and headed back to support my father in the immediate aftermath. My brother dealt with all the practical and administrative stuff while I built what amounted to platform under my father’s emotional condition. I gave him a series of things to remember: I joked and called them “Rules.” When I returned to Kuala Lumpur, I spoke to him at least once each day and we got more “rules.” Also, I was reminding him of the same things.

I decided to write them down, and to add some explanation of them. The plan was to e-mail them to him. It took only one day and as I finished, I realised I had written a short book. By the time I’d edited it and fixed all the typos, etc., it was actually more like a book than an e-mail.

Publishing platform CreateSpace, a subsidiary of Amazon.Com, ran it through their checks and production process in record time and it was available via Amazon.Co.UK within hours. Because delivery within the UK was faster than getting author copies from the USA, I ordered copies of the book which were delivered to my father and other family members the day before my mother’s funeral.

Amazingly, that was faster than it would have been to have e-mailed the document to a printer to have it printed, bound and delivered. 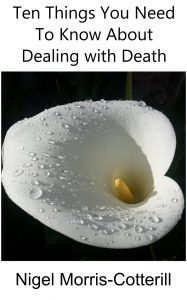 Q. What’s the story behind the flower on the cover?

A: [laughs] I am the world’s least enthusiastic gardener and, probably the worst gardener in the world. Everything I plant dies. I’ve tried growing herbs on the balcony of my KL apartment: they pop one leaf out of the soil, decide they don’t want to be there and shrivel up and die. I’m a major disappointment to my mother who was an avid gardener. As she found it more difficult to get out into her garden she could see the flowers through the window but not get close to them. When I was there, I would take photographs of her flowers and e-mail them to her so she could see the close ups on the giant screen on her Mac.

One day last year, there had been rain and one of her favourite flowers had collected rain drops. I don’t even know what the flower is called but I know that her favourite flowers were always white lilies. If it’s a lily, then the boy done good, as they say in London. Anyway, I took the photo and when I came back to KL after that trip, I asked an artist friend to make a watercolour painting from that photo. It was beautiful and I took it back to the UK in November 2014 as a birthday present for my mother. She was delighted with it and was looking forward to hanging it in full view of her favourite chair when she was admitted to hospital. It seemed right that a book dedicated to her should have the photo of that flower on the cover.

Q: You are known as the author of text books for the financial and legal sector and yet, at the end of this book, there is a poem called “For Roy.” What’s the story there?

A: My father used to write ditties for fun. In fact, some of my earliest exposure to rhyme was because every year he would compose a few lines that were put onto posters on what was called “The Christmas Bus.” In Teesside, where he was the Engineer on a large bus fleet, every year a bus would be decorated with all kinds of celebratory insignia. It wasn’t overtly religious but, of course, there were Christmas themes including the birth of Christ and Father Christmas. The buses were very popular and there was always a bit of mystery as to the identity of the Christmas Poet. I don’t think many people ever found out it was my father.

When I edited the book, which was dedicated to my mother but written for my father, I removed the personalisation that had been in it throughout. So I needed to make something about him, specifically for him. The poem seemed like a nice idea. He likes it so that’s the only thing that matters. If others like it, too, then I’m honoured that it touches the lives of others.

Q: Is the book religious?

A: No. Not at all. Not even a tiny bit. It’s about people, not about customs and rituals; it’s about responses to circumstances not beliefs. I don’t think we can even call it non-denominational because it just doesn’t have any religious aspect except one: it says that if you find comfort in a belief, then that is a good thing, regardless of what that belief is.

A: I have not set out to be controversial in any way. Even so, some people are always looking for a reason to find fault, to be offended because they can make political or social capital out of it. They fly into a synthetic rage over some slight they have fabricated. That says more about them than about the thing they are criticising. So I’m sure someone, somewhere, will find something negative to say. But seriously, if they do, it’s because they are trying to get attention for themselves, because it’s easier to get attention for knocking others down than it is to do something positive to make the world better.

Q: You didn’t go to your mother’s funeral. Why not?

A: Actually, a close friend and I fkew to the UK expecting to go to the funeral. After all, in this part of the world, the tropics, we expect a funeral within a couple of days. Apparently, in the UK, a lot of people die around Christmas and New Year and so there was a waiting list. We went to a friend’s restaurant for dinner one night and found, much to our horror, that his wife’s mother had died a week before my mother. Incredibly, they were both scheduled for cremation on the same day. If we thought our case was bad, theirs was worse: it was almost four weeks after our friend’s mother in law’s death.

I recorded a reading that was broadcast at the funeral and my son, James, who had returned to the UK on a sabbatical from his singing career, intending to spend some time with his grandparents, spoke on behalf of our “branch” of the family.

I’d spent a lot of time in the UK for family reasons in the past year and we had already booked our return tickets for after when I had expected the funeral to be: so we stuck with the plan, instead of waiting for three weeks, and returned home to KL and I’ll honour my mother at her interment in her family grave in Herefordshire later this year. For her, that would be more important than the funeral service anyway. Some people think it was a bad decision: honestly, I don’t care what they think. It’s between my mother, my father and me. At least two of us are happy with the decision – and Mother’s not sent any sign she’s not!

Q: Do you believe in life after death?

A: I believe faith is a very personal thing, between a person and God, whatever that person calls God and however he chooses to worship Him. I don’t discuss my religious views beyond to say that if we believe that God gave us individual responsibility that includes the freedom to worship how we like. He gave us guidelines that change as circumstances and times change, not laws that must be applied so strictly that human development is stifled, so that we can try to leave the world a better place than how we found it.

Q: You are obviously very close to your parents. Do you regret living so far away?

A: It’s been difficult as they got older and needed more things doing for them but it’s much easier now than even a few years ago. While social media has its downsides, it’s much easier to feel closer than it was when the only available communications, other than actual post of course, was e-mail and telephone. We are the lucky generation: video conferencing is an inexpensive, even free, reality and it’s quicker, easier and cheaper to browse for a present online and have it delivered than to go into shops on the other side of the world and get things delivered.

Of course, when there are problems, nothing beats actually being there. But – and here’s a fun fact – I can be in their house within 20 hours of leaving my flat. Last year while I was in the UK, I went to Glasgow for a meeting: there were no seats for flights at a suitable time so I had to use the train and even then had to make a late night booking. My meeting finished at 5pm. I got back to the house at 11am the next morning: 18 hours. It’s not so very different!

Just before Christmas I had to go to Singapore from KL to collect my son’s guitars. It’s less than 800km return but it took me 15 hours to drive there and back.

In any case, there are people available to to help with anything that needs doing. Add in internet shopping, internet banking and so on and the world goes to them in ways that they could not have imagined even ten years ago.

So being far away is more of an emotional issue than a practical one and recognising that helps with the emotional aspects.

Q: What do you think your mother would say about the book?

A: She was a fantastically pragmatic person who elevated stoicism in the face of difficulty to an art form and almost always with a smile. I think she would enjoy the idea of taking a helicopter view of a large problem, identifying the most important areas, reducing them to bite-sized pieces and solving them one by one. I know she would like the fact that there is humour, too. [Laughs] Knowing her, she’s up there, spreading the word and telling others that their loved ones would benefit from reading it and they should send messages back to the bereaved to get a copy!

If you use any or all of this interview / Q/A you agree to the following terms.

1. This Q&A may be used by news organisations and blogs.

2. The Questions and Answers must be used as is, without editing or abridgement.

4. Please let us know the date and location of where you use this interview. Use the “contact me” form.