Apparently, LegalTech has become a thing.

I’m already bored with it.

That’s what someone asked me and I told them .

Here’s an example: When I started my own practice in 1986, I wanted computerisation to be at the heart of the firm from day one. I bought a system that did things like accounting to meet the regulatory requirements and time recording and billing but that wasn’t very interesting.

What was good was the, albeit rudimentary, “expert systems” which provided an early version of case management for both conveyancing and litigation.

So I went to its producers and suggested we worth together to build a system that worked like lawyers work. I ended up working on the development of a a project that turned out to be quite successful, in the limited market of the time where need far exceeded want but need was not recognised.

One day, while I was in a meeting at their offices, they took a support call from a worried secretary in a law firm.

“Can you help her?” said the support guy who was comfortable with fixing air gaps over the phone but got a bit lost with the software side of things.

So the call was put on speaker and there was screaming in the background. “Why won’t you do as I f….ing tell you?”

More yelling “If you don’t do as I tell you, I’m going to throw you out of the f….ing window.”

We had reports of people dictating their time sheet entries instead of just tapping them in in real time, of printing out the day’s tasks and handing the list to someone else at the end of the day to mark those that were completed, etc.

When I called a solicitor in Wales to ask for his fax number he asked “what’s a fax?”

Then there was cost: in 1997, to swap my 10MB SCSI hard disk for a 20MB disk, the cost was GBP750. The only way to connect my two offices was by ISDN with a captive LAN. A couple of years later, dial up internet was rated at 14.4kb/s but rarely went within spitting distance of that.

Years before, I’d produced a program on the Sinclair Spectrum to streamline the production of divorce petitions using template blocks – but we still had to re-key the results onto proper paper because there was no Spectrum to Typewriter interface other than heat-sensitive bog roll and a bleary eyed typist trying to read it before it faded.

In 1998, using DOS before such things as presentation software reached us, I wrote in Basic a slide-show to present our services at local exhibitions. It ran on an IBM PC clone.

And I wrote about legal tech for several industry magazines.

I even experimented with fuzzy logic, unstructured data in the shed at the bottom of my garden in the 1990s using a long-forgotten and very novel database program called AskSam which is still available, apparently.  I should have persisted, developed a relational database and built something to identify connected activity.  But that’s today’s me talking. At the time, its use in legal practice was peripheral.

Why has it been so long before LegalTech has become a thing?

It hasn’t .. it’s been there ever since WANG put word processors the size of small rooms into big firms in the City. It’s just not been trendy and lawyers have been a hard market to crack until a younger, less cynical, generation have worked their way to senior partner level. Now many are suckers for bright shiny things that they don’t understand.

Me? It’s just all so old hat. I suspect Charles Christian, the doyen of all LegalTech writers for forty years and who has recently run off to be a global DJ and author of strange things (or an author about strange things) finds it pretty much the same. It’s hard to get excited about people in shiny suits, or jeans and sweaters, saying how they’ve got this great new idea. 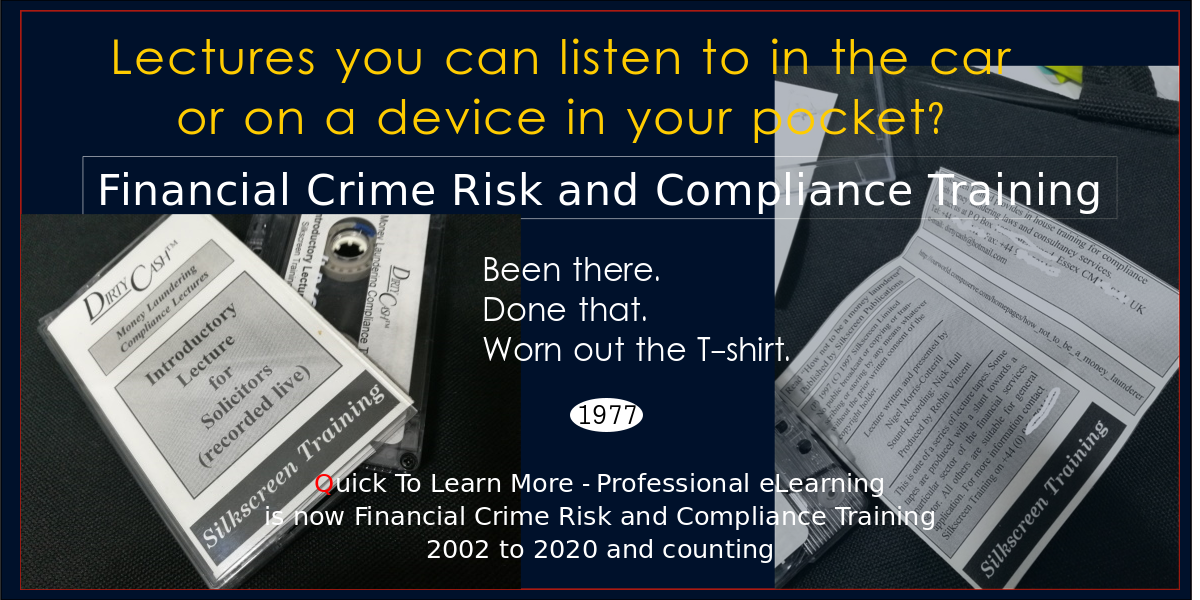 e-learning from front liners to experienced compliance officers and more. FinancialCrimeRiskandComplianceTraining.com Consultancy with more than a quarter of a century's experience, knowledge and thinking.
We use cookies on our website to give you the most relevant experience by remembering your preferences and repeat visits. By clicking “Accept All”, you consent to the use of ALL the cookies. However, you may visit "Cookie Settings" to provide a controlled consent.
Cookie SettingsAccept All
Manage consent