To buy the paperback: visit your local Amazon group site and
search for product code 1507730128 or order through your local bookshop.

Q&A with the author

When Nigel Morris-Cotterill’s elderly mother died unexpectedly, he found that one way to help his father come to terms with loss was to set out a series of bullet points.

For fun, he called them “rules.”

END_OF_DOCUMENT_TOKEN_TO_BE_REPLACED

The power of independent thinking must not be overlooked.

There is a tendency towards narrow thinking by supranational bodies, governments, regulators, training companies, FIUs and, even, financial crime risk and compliance officers.

Nigel Morris-Cotterill’s strength, and how he can benefit your organisation, is that he is not and never has been part of that approach.  When presented with opinions he questions, tests and proves, or often disproves, them.

He runs into the wind while others sail before it.

Equally importantly, he presents your organisation with a balanced view and a view that is, often, to a point over the horizon enabling you to develop policies and procedures that are stable, not affected by fashion which leads to more effective systems, more effective compliance and a staff which is not frustrated by constant change. This means cost savings because systems and controls do not need regular substantial revision and staff do not need major retraining to meet current political policy demands. 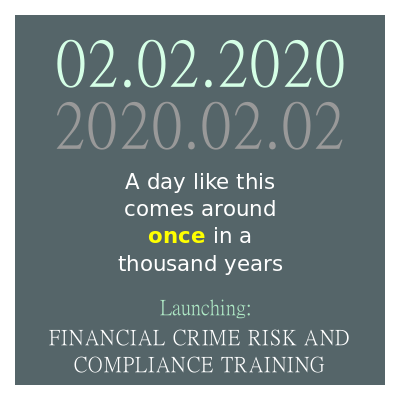 Good grief. This blog has always been a bit sporadic but now it looks downright dilatory.

So, you’d think that, except for one post last month I’d slept the winter away, wouldn’t you?

There’s a story and this is the biggest milestone.

At least for now. There’s more to come.

END_OF_DOCUMENT_TOKEN_TO_BE_REPLACED

When I started writing “Sun Tzu and the Art of Litigation” more than 20 years ago, there was no world wide web.

END_OF_DOCUMENT_TOKEN_TO_BE_REPLACED

The Essential Guide to winning in litigation

END_OF_DOCUMENT_TOKEN_TO_BE_REPLACED

The avoidance of fraud and money laundering in your organisation

This book established Nigel Morris-Cotterill as a critical thinker and long-term strategist, explaining a comprehensive approach to help create systems and controls that would be stable and to not require constant change which is both costly and militates against the effectiveness of systems up and down organisations.

END_OF_DOCUMENT_TOKEN_TO_BE_REPLACED

The Euro is not quite as new a concept as some would have you believe. It is, at its most simple, an extension of a series of unsuccessful measures to stabilise currency movements, and harmonise (some would say homogenise) economies, within Europe.

END_OF_DOCUMENT_TOKEN_TO_BE_REPLACED

Criminals commit three basic types of crime – crimes of passion or honour, crimes of violence or vandalism and economic crimes.

END_OF_DOCUMENT_TOKEN_TO_BE_REPLACED

The simplistic answer to this question is that criminals launder money. But that answer is far too simple to be completely true. The fact is that money launderers are to be found in all walks of life, many acting entirely innocently.

END_OF_DOCUMENT_TOKEN_TO_BE_REPLACED

According to some estimates, some 80% of property crime, for example, theft, is committed to fund drugs habits. If there were no people willing to buy the stolen goods, then there would be no point in criminals committing theft because there would be no money raised.

END_OF_DOCUMENT_TOKEN_TO_BE_REPLACED

The history of money laundering is, primarily, that of hiding money or assets from the state – either from blatant confiscation or from taxation – and, indeed, from a combination of both. And, of course from those seeking to enforce judgments in civil cases or to follow the money that results from other crime. It is interwoven with the history of trade and of banking.

END_OF_DOCUMENT_TOKEN_TO_BE_REPLACED

The most hotly argued topic relating to money laundering has long been whether laws do – or even should – relate to tax crimes.

END_OF_DOCUMENT_TOKEN_TO_BE_REPLACED

Money Laundering and the Euro
Extract from “How not to be a money launderer” Ed2
By Nigel Morris-Cotterill
Published 1996.
Second Edition: December 1998
Paperback and e-book (without obsolete appendices) reprinted 2011.

END_OF_DOCUMENT_TOKEN_TO_BE_REPLACED

Money laundering is the process by which criminals create the illusion that the money they are spending is actually theirs to spend.

END_OF_DOCUMENT_TOKEN_TO_BE_REPLACED

We are all guilty of sloppy use of language and it has been commonplace for the funding of terrorism to be regarded as money laundering. But although there may be some similarities, there are also some technical and legal differences.

Money laundering involves the taking of the proceeds of crime and creating the illusion that the person who uses that wealth has obtained it by legal and lawful means. And, indeed, the proceeds of crime do often fund terrorism. Typical crimes for funding terrorism are the organised crime rackets of drug trafficking, people trafficking, extortion and other offences. However, much lower grade (and more difficult to detect) crime such as simple fraud, burglary and robbery are used by terrorists who are “sleeping,” that is already in place in a country waiting for instructions and do not want to come to the attention of the authorities by becoming employed or by claiming benefits.

But much of the money intended for terrorism does not arise out of crime – it is paid into the accounts by people who earn it legally in ordinary jobs and who pay money to a cause in which they believe. For this reason, money does not come into the financial system as dirty money, which is a point at which dirty money is often most visible.

Moreover, clean money intended for terrorism does not move around the financial system like dirty money: it does not need to make rapid movements between accounts, across borders, through a range of currencies, into and out of assets. Simply, it behaves like ordinary money doing ordinary things and so is almost impossible to identify.

As a result, the usual range of counter-money laundering techniques and tools are of very limited use. For example, each act of terrorism actually requires remarkably small amounts of money – and so neither cash transaction reporting (where reports are triggered by the value of deposits, withdrawals or transfers) nor suspicious transaction reports are likely to be triggered.

More, even if such reports are made, it is unlikely that the agencies to which the report of a withdrawal is made would have time before the terrorist act to respond to the withdrawal of cash for a terrorist purpose.

Transaction analysis (that is reviewing what happens in an account to identify potentially suspicious activity) is retrospective and therefore may give intelligence for the purpose of tracking flows to the ultimate place of withdrawal or back to their source but there is little prospect of such systems providing early warning that an account is likely to be used for channelling funds to an active terrorist.

The amounts of money needed for terrorism are very small. For example, immediately after 11 September 2001, the USA’s FBI declared that the terrorists would have used in the region of USD6 million. We were interviewed by media all over the world, including in the USA, and expressed our opinion that the total cost of the terrorist operation would have been in the region of USD250,000. Several weeks later, the FBI revised its opinion to about USD300,000 and then, later, down again to USD280,000. What was also clear to us, immediately, was that the amounts of money concerned would have averaged less than USD10,000 per person involved in the scheme and that there was every likelihood that few if any of the monetary transactions involving the terrorists would have triggered a cash transaction report which US banks are required to make in respect of cash transactions or international wire transfers exceeding USD10,000 are made.

An appalling aftershock of the attacks of 11 September 2001 was an immediate backlash against those of Muslim or Arab background or appearance. Governments made lists of those that they deemed dangerous and the prejudice was reinforced by the fact that the vast majority of the names on the lists were Arabic or Muslim origin, regardless of the fact that terrorism is an international problem and is not restricted to the lunatic fringes of the Arab and Muslim worlds.

In response to the problems, Silkscreen Consulting looked for a way of helping banks and other financial services businesses to pre-identify those who have a predisposition to financial crime. The result is Risk Values.

The Risk Values project is designed to make that identification without reference to any racial or religious indicator such as name, place of origin, etc., and, uniquely, without reference to the customer’s transaction history. After all, many accounts opened for money laundering or funding terrorism are used for only a short time after opening and so transaction history as a predictive measure is of little use. You can find out more about Risk Values at RiskValues.Com.

You can get the benefit of analysis from Silkscreen Consultants by engaging us (complete the enquiry form and by reading World Money Laundering Report (www.worldmoneylaunderingreport.com)

e-learning from front liners to experienced compliance officers and more. Financial Crime Risk and Compliance Training.com Consultancy with more than a quarter of a century's experience, knowledge and thinking.

We use cookies on our website to give you the most relevant experience by remembering your preferences and repeat visits. By clicking “Accept All”, you consent to the use of ALL the cookies. However, you may visit "Cookie Settings" to provide a controlled consent.
Cookie SettingsAccept All
Manage consent